During the spring of 1943 the area around Westleton Walks and Dunwich Heath was the scene for one of the first large-scale military exercises to inform the planning of D-Day: Exercise ‘Kruschen’.

The purpose of the exercise was to consider the ways in which the German defences of the Atlantic Wall could be breached. The ability to break the German fortifications would be crucial to the success of any Allied landings in occupied Europe. The problem had been brought home in August 1942 during the disastrous raid on Dieppe in Normandy, when the inability to overcome the German defences led to heavy casualties and the failure of the mission. Exercise Kruschen was an attempt by the Allied high command to avoid making the same mistakes twice and involved the trialling of specialised equipment and the development of new battle drills for attacking troops. The exercise started in January 1943 and went on until that April, culminating in two final demonstrations. 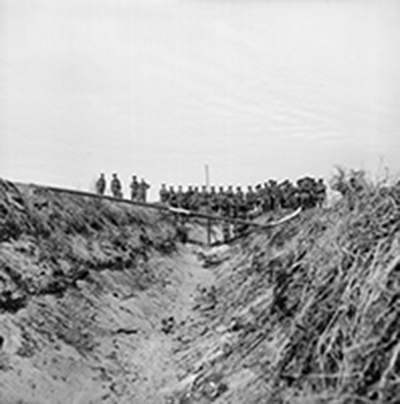 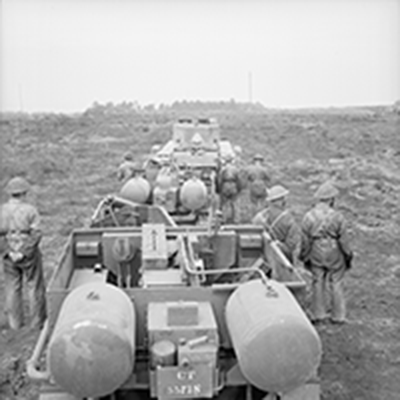 Image (left): Senior officers watching the ‘Snake’ in one of the final demonstrations of exercise Kruschen. This device delivered 800lb of explosive from the comparative safety of an armoured vehicle and was used to blow a passage through minefields and barbed wire. The device on the end, which allowed the snake to be pushed uphill was called the Davidsons nose and was an innovation of the exercise. (Imperial War Museum).

A Hedgehog on the Heath

In order to facilitate the exercise, a complete mock German defensive position was constructed, which included earthworks, minefields, barbed wire and concrete pillboxes. In the German army, such a strongpoint was nick-named a ‘Hedgehog’, as it bristled with defences like a hedgehog rolled up into a ball.

Large parts of this hedgehog can still be seen today. The most obvious feature is the surrounding anti-tank ditch that still cuts a swathe through the landscape. Within this defended perimeter are concrete pillboxes, shelters and numerous shallow depressions intended to replicate German trenches. The ruined concrete structures mimic emplacements for anti-tank and heavy machine guns.

The defences were built to closely replicate their real counterparts as close as possible using information gained from underground resistance networks in occupied Europe, aerial reconnaissance and British experience of German fortifications in North Africa. A mixed force drawn from across the British army, including infantry, artillery, tanks and engineers used the Hedgehog to practice new techniques and trial new equipment. 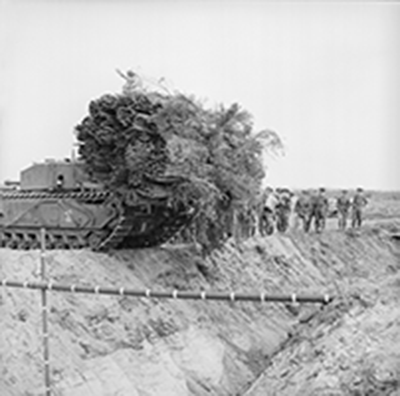 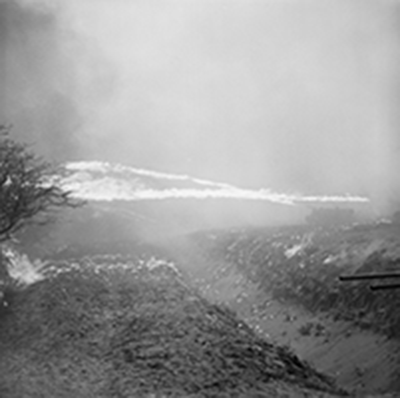 Image (left): Fascine-carrying tank. Developed during the First World War, the fascine was re-introduced as a device during the Second in order to allow tanks to cross anti-tank ditches (Imperial War Museum).

Image (right): Flamethrowers on the heath during the final demonstration (Imperial War Museum) ).

The key findings of the exercise were the effective use of a large bundle of wooden palings known as a fascine dropped by a tank to cross the anti-tank ditch; the delivery from the safety of an armoured vehicle of an explosive charge known as snake to clear minefields and barbed wire; new information about the use of flamethrowers and a suitable drill for the attacking troops. These were showcased in two demonstrations that were attended by high ranking politicians and army officers.

In April 1943 the war artist Edward Bawden was attached to the exercise and his work is an important source for what was taking place at that time. This includes a remarkable panorama view of Westleton Walks, which shows troops building fascines, flamethrowers and vehicles crossing the anti-tank ditch.

Image: Exercise Kruschen by Edward Bawden. This picture shows the exercise fully underway in April 1943 and men can be seen making fascines while vehicles cross the anti-tank ditch and practice the use of flamethrowers. The idea of a panorama was something of an accident; Bawden initially started with one piece of paper and only later decided to added additional pieces to each side until the painting was complete (Imperial War Museum IWM ART LD 2890).

Today it is difficult to imagine how busy the Walks would have been in the spring of 1943. So much ammunition was used during the exercise that men took bets on how many live rounds they could fire off and one veteran also recalled that so much sandy soil was churned up by vehicles that the dust clouds resembled the North African desert.

Following the end of Kruschen, the ‘German’ Hedgehog was still used for training by troops. In November 1943 the concrete pillboxes were blown up by engineers from the 79th Armoured Division, who later took part in the D-Day landings.

Exercise Kruschen was only the first part in a much wider programme of training that informed Operation Overlord. In subsequent months, methods and equipment were refined and improved. In the end, 79th Armoured Division developed a specialist tank the Armoured Vehicle Royal Engineer (AVRE) to solve the problem of breaching German concrete fortifications, one of a number of vehicles named after the Divisional Commander and known as Hobart’s ‘Funnies’. These proved highly successful to the D-Day landings and subsequent campaign in North-west Europe. Their origin and development owed more than a little to what took place on Westleton Walks. 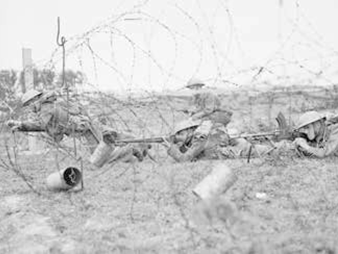 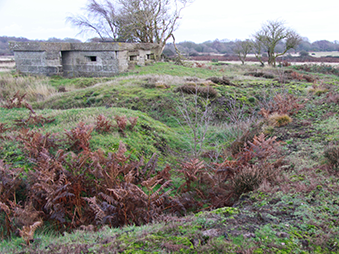 resources and Information about the Second World War 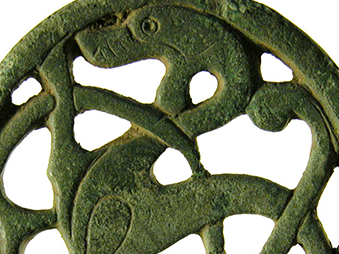